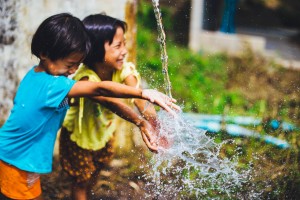 One time when in Chicago I went to an improv theater performance. I’d had a busy week, and it was fairly late at night. I was tired and not that excited to be there. In fact, I’d been thinking of not going at all.

As the room began to fill up before the performance started, I noticed that almost everyone there seemed happy and excited. There was a buzz in the room. I found myself waking up, and feeling happy and excited too.

And it’s not only happiness that’s contagious. A 1985 study by M. J. Howes showed that people without depression who roomed with someone who suffered from even mild depression would themselves become depressed over time.

One theory about why emotions are contagious is that people tend to mimic the bodily postures of those around them, or of those they see in a video. This, in turn, makes them start to feel the feelings of the people around them, even strangers or people in a video.

We now know that people are affected by the emotional states of other people even in a matter of seconds. Facial expressions are particularly contagious, even through watching a video.

P.S. The improv theater was T.J. and Dave. And afterwards I knew why there was so much buzz in the room — they were amazing.

The Best Psychology Books You Should Read
The Next 100 Things You Need To Know About People: #114 — Great Stories Release Brain Chemicals