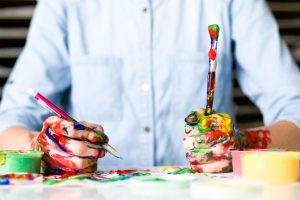 What if one hundred people went to a fashion show? Would everyone say that the clothing designers are creative? Or what if they saw a graffiti artist’s work on a wall—would they say that the artist is creative? What about people who design technology? Are they creative?

There are many possible definitions of creativity. We probably won’t agree entirely on the definition or on the results. However, here’s a definition I’ve put together that I find descriptive and useful:

Creativity is the process of generating new ideas, possibilities, or alternatives that result in outcomes that are original and of value.

Even with this definition, we may not necessarily agree on who’s creative and who’s not. But the definition gives us a place to start talking about creativity, and a way to evaluate whether or not a particular activity is creative.

Let’s clear up some myths about creativity:

There definitely are two sides to the brain—the left and the right—and it’s true that there are some brain structures on one side that aren’t on the other. For instance, the ability to speak and to understand language is on the left, and some spatial awareness is on the right. However, it’s simplistic to say that when you listen to music, you’re listening to it only with the right side of your brain. Even people who don’t play an instrument show activity on both sides of the brain when listening to music. (Although those who play an instrument show more activity in more areas of the brain than those who don’t.) It’s simplistic to say that the right side is the creative side.

Hopefully this debunks some of the myths about creativity.

The Next 100 Things You Need To Know About People: #117 -- Why People Spend More When They Use A Credit Card
The Best Psychology Books You Should Read