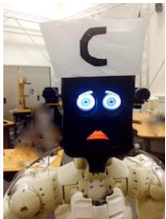 3 Replies to “Revisiting ALL UPPERCASE LETTERS vs. Upper And Lower Case”