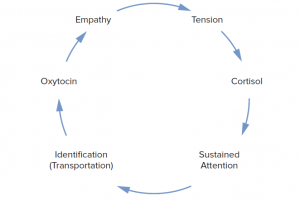 George Lucas and the Hero’s Journey — In 1975 George Lucas had written two drafts of Star Wars, but the story had not yet “come together”. He then re-read a 1949 book by Joseph Campbell, The Hero with a Thousand Faces. Lucas had read the book first in college, and now he re-read it. He decided to revise his Star Wars story to match one of the story archetypes that Campbell described in his book, The “Hero’s Story. A typical hero’s story usually contains the following steps:

These common plots resonate with people. When a story follows one of these plots, people can easily understand the story and are more likely to become involved.

The dramatic story arc comes from Gustav Freytag, a nineteenth-century German playwright and novelist. Freytag studied plays and stories from the Greeks and Shakespeare through to stories from his own time. According to Freytag, an effective story is divided into five parts: 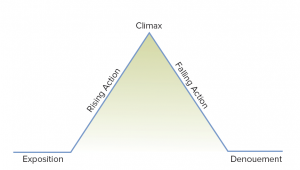 Zak found that during the rising action people release cortisol, at the climax people release oxytocin if they feel empathy with the main character, and if there’s a happy ending people release dopamine. Interest can be maintained by cycling through these story pieces and keeping the brain chemistry going (see the image at the top of the post).

What do you think? Do your favorite stories follow the dramatic story arc? Are they one of the 7 archetypal stories? Is this why Batman vs. Superman was considered a not great movie?

2 Replies to “The Next 100 Things You Need To Know About People: #114 — Great Stories Release Brain Chemicals”